At 6:30pm on Sunday July 28th McQueeney Fire Department was dispatched for an incident on FM725 @ Old San Antonio Road where a large tree broke and came down on the roadway, striking a couple on a CanAm 3 Wheeled Motorbike and also striking another passing vehicle.

The department responded with 8 firefighters, 1 Command Unit, 1 Rescue Truck, and multiple POV units. Upon arrival responders found FM725 blocked in both directions just north of Old San Antonio Road and that the occupants of the motorbike had been able to escape the tree collapse with minor injuries and had managed to remove themselves from the downed tree with assistance of bystanders and neighbors. McQueeney VFD medical personnel began patient assessments and initial treatment while other firefighters, assisted by Guadalupe County Sheriff’s Deputies shut down the roadway and established traffic control diverting traffic away from the scene.
Seguin EMS paramedics arrived and transported the passenger and driver of the motorbike to an area hospital to receive treatment for their injuries and to be checked out further. Texas Department of Transportation crews were called in to clear and remove the tree and assist with reopening the roadway.
Agencies on scene included McQueeney Volunteer Fire Department, Seguin EMS, Guadalupe County Sheriff’s Office, and Texas Department of Transportation. All units were clear of the scene and the roadway was reopened at 10:30 pm.

Responding agencies would like to thank area motorists for their patience and understanding with the detours while the road was closed for such an extended period of time. 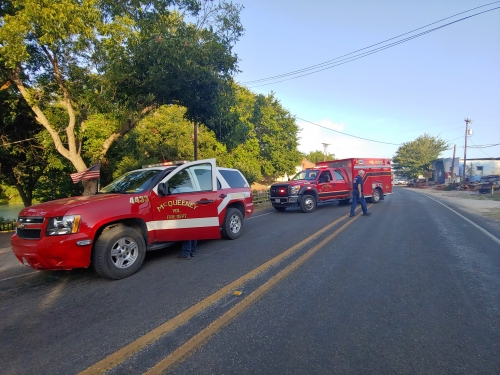